Wanted: “Exceptional people to create and deliver fun and escapism.”.

That’s the casting call of the new Margaritaville Hollywood Beach Resort, which kicked off a three-day job fair Tuesday seeking to hire 400 to 500 full- and part-time employees for its opening this summer.

“I think we’ll see thousands of people over the next few days,” the hotel’s general manager, Cate Farmer, said before opening the fair, which runs 9 a.m. to 4 p.m. through Thursday at the Hillcrest Golf and Country Club at 4600 Hillcrest Drive. 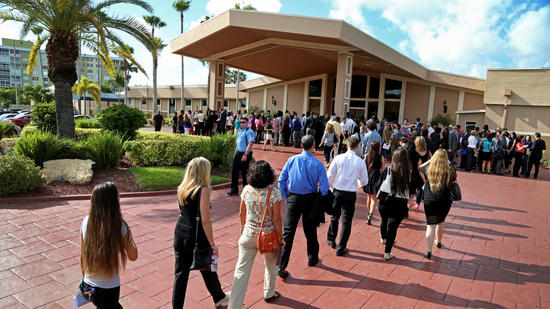 Hundreds line up at the Hillcrest Golf and Country Club in Hollywood to apply for jobs at the soon-to-open Margaritaville Hollywood Beach Resort.

By 10 a.m., the line coiled several times back and forth. Candidates sought work in restaurants, bars, housekeeping, security, recreation and other resort areas.

Jobseekers said they were ready to show off their abilities to create and deliver fun.